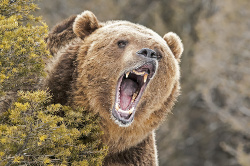 I do a lot of my running on trails and in the countryside. It's great to get away from traffic and pedestrians and see a bit of nature and have some time to think to yourself.

Yeah, you get the odd dog-walker, but even though I've previously ranted about dogs, the truth is that the vast majority are friendly and have decent owners.

The main problem out here is the other animals.

"What, you're scared of a squirrel?"

No, I'm not scared of a squirrel. The thing is squirrels are really noisy, and when you're running alongside some trees and one starts rushing around like a maniac among the leaves it sounds like it might be a bear.

These don't bother me much and they are usually very timid, but sometimes one'll stand its ground just a little too long...

I always think the same thing when a deer runs out in front of me. "Wow, that's a big fox. Hang on, is that a dog? ARGH, IT'S A DEER!"

It's always a little Bambi. I've never had a full-grown stag race out.

But then I start trying to remember those signs I've seen in Richmond park about breeding season and how the stags get protective at certain times of year. When was it? May to December? No, that was a sitcom from the early '90s. All I know is that if Bambi is around then mummy and daddy probably aren't far behind and maybe they're protective. Time to pick up the pace.

Sheep bother me less than they used to. There are lots of fields packed full of sheep around here and they always get out my way. But I'm still keeping my eye on them. the opportunistic little bleaters.

Not scary, but what about rabbit holes? There's an ankle-twisting hazard for you.

I'm really not sure about cows. They're pretty big. I remember hearing something on a podcast about 12 people a year being killed by cows.

And wasn't there an American show called "When Cows Attack"? Surely not. Who would watch that?

A bloke in the local pub told me about how he and his wife were out for a walk and a curious cow pinned her against a fence momentarily. They managed to escape without any injuries, and he at least learned a useful lesson: don't punch a cow; it has no effect on the cow and you really hurt your hand.

You probably won't come across a camel in the English countryside, but that bit about cows reminded me of this.

* It's also possible I just ran past a pig farm