The Art of Running Faster 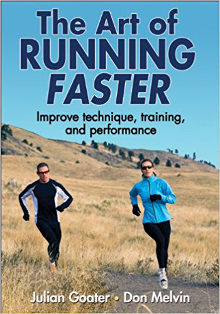 The Art of Running Faster by Julian Goater and Don Melvin includes a wealth of information that should help runners of all abilities to improve. There's advice on developing the various components of fitness essential to performing at your best, along with lots of technical pointers and details of sessions and how to structure your training.

It's also filled with interesting anecdotes from Goater's career and those of his contemporaries, usually in order to illustrate a point or strengthen an argument, which is quite effective.

Each of the book's chapters is structured similarly, starting with an introduction, followed by sub-sections focussing on a particular point or discussing a particular topic, and finishing with a summary of the main points.

The introduction starts with Goater describing a heel injury that looked set to upset his plans for the English Cross Country Championships just over a week later. The injury forced him to change his training in the build-up to the race and resulted in a win and what he describes as the "easiest race of his life".

He explains how this led him to consider the best approach to take towards running in general, and how it made him realise that training shouldn't just be a case of knocking out the miles, but also about training more smartly.

Chapter One: Pushing the Limits

The first chapter looks at what the authors consider the main components of fitness. These are the five Ss: speed, strength, stamina, suppleness and skill. A guest "s" - psychology - is also included.

A section is given over to discuss each of these qualities in turn, including an explanation of why they're important and then a brief look at how a runner can go about improving each of them.

The key message of this chapter is that runners should always be aiming to achieve something specific from a session and be aware of its purpose.

The authors list the various types of runs that might be included in a schedule. Namely, recovery runs, long runs, fartleks, and speed & hill sessions. There's then a few notes on balancing a weekly training schedule.

Technique is often overlooked in books on running, and it's a real shame because the vast majority of runners will benefit from some guidance.

Section titles such as "Keeping your head", "Giving yourself a hand", "Balancing act" and "Ready to roll" should give some idea as to the chapter's content. Having read this there'll be plenty to get out and work on straight away.

Chapter Four: Gearing up for Success

This short chapter starts with a story of how a cyclist improved performance by switching to a bike with a different gear ratio. Gears on a bicycle are compared to different cadence/stride length ratios when running and the argument is made that runners can also improve performance by running "in the correct gear".

A decent argument is made for the importance of stretching for runners and several stretches are described and accompanied by illustrations. There's also a description of how to stretch properly.

Goater claims that when running his 5,000 metre PB, at 4:15/mile pace, although working hard, his breathing was controlled. Given this fact it's probably worth listening to what he has to say about breathing while running.

The importance of relaxation and posture is discussed with respect to breathing and useful tips are given along with a few exercises designed to help loosen and strengthen the chest and shoulder muscles.

This chapter's all about running with a club and how it can help your training and motivation as well as providing access to other runners and coaches that can offer advice and support.

Chapter Eight: The Ups and Downs of Running

Attention is turned to hills and the authors describe how hill training can help target the fives Ss – speed, strength, stamina, skill and suppleness – described earlier.

Example hill sessions specifically intended to improve strength & stamina and speed & power are detailed and there's information on how to fit hill training into your schedule along with ideas for variety.

There are also short sections on downhill sessions, sharpening sessions and tapering sessions.

An argument is even presented for hill sessions being a sociable affair!

Chapter Nine: Strength in the Fields

You'll often hear the idea that cross country running can help build strength, and the authors of this book certainly agree.

The argument is made that it's best to introduce runners to cross country when they're young and can enjoy the mud, puddles and all other things that come with classic cross country courses.

There's advice on preparing for cross country races and an explanation of how exactly cross country running helps to improve all components of fitness, including strength and mental toughness.

Chapter Ten: Running Round in Circles

This chapter's all about what is often referred to as "speedwork". Not actual work on improving top-end speed, but rather harder anaerobic sessions.

The benefits are described and there is advice on getting started, progressing, designing sessions and recovery.

Nobody enjoys injuries and it's worth doing all you can to avoid them. This chapter includes sections on injury prevention and choosing the correct running kit and shoes. There's also some advice about what to do should the worst happen and you do end up injured.

Chapter 12: All in Your Head

There's plenty here about how to build mental strength, and topics such as nervousness, mental preparation and concentration are discussed.

The final chapter is all about reaching peak condition for the big day. The concepts of periodisation are explained and there's a section on tapering and also a brief discussion about cheating (i.e. don't do it).

There's also a note about being careful not to overdo it, and it finishes with a section on how you can sometimes surprise yourself with your performances.

Julian Goater was previously an elite-level athlete who competed in several international championships throughout his career.

Following his retirement from international running he has coached athletes of all abilities and still takes part in - and wins - various running events, duathlons and triathlons.

Don Melvin is an author, journalist and recreational runner who became a fan of Goater's approach after joining one of his running groups and seeing massive improvements.

Buy your copy of The Art of Running Faster on Amazon