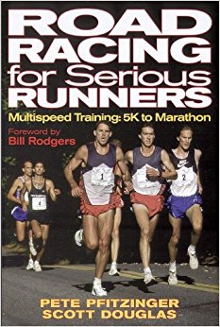 "Road Racing for Serious Runners" by Pete Pfitzinger and Scott Douglas is an approach to preparing for distances from 5k through to marathon with an emphasis on multispeed training.

The book is organised into two sections. The first, "The Physiology of Running", argues the case for a multispeed approach, explains the various types of training & energy systems and includes plenty of advice and information on training and racing optimally. The second section, "Training for Peak Performance", includes a series of chapters dedicated to training for particular events.

It's a great read for anybody looking to take a more structured approach to their training and to start taking things more seriously.

There's also a description of how the book should be used and details of what's to be expected in later chapters.

The chapter begins with a definition of VO2 Max and a consideration of the factors that contribute towards it, before going on to describe how runners can go about improving it with training. This includes directions on structuring workouts in terms of frequency, intensity, speed and various other factors.

In the second half of the chapter attention is turned to basic speed: how it's defined and how it can be improved.

Lactate Threshold (LT) is defined and there is a discussion of its importance (and the importance of running economy) in relation to performance, specifically in contrast to VO2 Max. There is also information on how to determine one's LT, instructions on how to go about improving it and details of the changes that occur in the body as a result of LT training are listed and explained.

The second half of the chapter looks at "pure endurance". There are details on how it's improved and again the changes that occur in the body to bring about improved endurance are listed and explained.

This chapter's full of useful information to help you train effectively. It begins with a discussion of base training and provides a few sample base training schedules for different mileages.

The different types of runs used within the schedules that appear later in the book are all explained and there's an example to illustrate how they're used.

There's a fairly detailed section on how to train by heart rate, which includes instructions on how to calculate your Heart Rate Reserve and a table of target heart-rate training intensities.

There are also sections on avoiding overtraining (defining, identifying, recovering from and preventing overtraining), avoiding dehydration (how to prevent it and what to drink) and injury prevention (improving flexibility, correcting muscle imbalances, yoga, massage, minimising impact shock and cross training options).

The chapter finishes with "Physiological Consideration for Female Runners", which is a look at the factors unique to women when training.

This chapter contains information on physiological factors that will affect race day performance. There are sections on race tactics, warming up and cooling down, fuelling (including glycogen loading and "carbing on the run"), tapering for both longer and shorter races and tips on how best to recover from a marathon in the first few hours, days and weeks following the race.

Chapters 6 to 10: Training for Various Races

Each of these chapters is dedicated to training for a certain distance or range of distances. Specifically:

Each of the chapters follows a similar format. There's an introduction followed by several sections:

A look at the energy systems that are important for the distance.

Comments on how to estimate your race pace.

Training for the Distance

Some notes on training and a description of the schedules included in the chapter.

A table that lists the importance of various training elements for the distance at various points in the schedule.

A detailed explanation of the training elements that make up the schedules presented within the chapter.

Advice on how to approach the race itself.

Each chapter also includes a couple of biographies of runners that excel over the distance, with details of their training and racing approach.

A reference table that shows equivalent times for 5k through marathon.

A pace chart for 400 metres to marathon.

Pete Pfitzinger is a running coach and exercise physiologist with an elite running history, having competed for the US Olympic marathon team twice and also having won the San Fransisco marathon on two occasions.

He holds an MS in exercise science, has worked as a contributing editor for Running Times and as a writer for several publications, including Runner's World.

Scott Douglas has been a competitive runner since the late seventies.

He's the former editor-in-chief for Running Times and has written articles for a variety or publications, such as Runner's World.