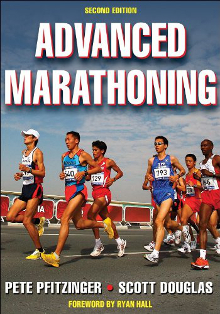 Note - this review is for the second edition of the book.

Advanced Marathoning, you won't be surprised to discover, is for those who wish to take their marathon training a bit more seriously and dedicate the time and effort required to race the marathon to the best of their ability, rather than simply getting through the distance.

The book is divided into two main parts. The first part is concerned with the principles of training and the second part provides training schedules.

Chapter One: Elements of Training

This is a long chapter and the authors believe that understanding its contents is of key importance to all readers.

It begins by considering the physiological attributes that are important for marathoners (such as a high lactate threshold and a high VO2 Max) and goes on to explain how one can go about training to improve these attributes.

There is then a section on how athletes should structure their training with periodisation and the chapter finishes with comments on "Tune-Up Races", which the authors believe are an important part of preparing for a marathon.

There's loads of other useful information in this chapter as well, including details on how to train by heart rate, how to tackle long runs and interval sessions, and how to build mileage sensibly.

Nutrition and hydration are important for all runners, and there are also special considerations for marathon runners.

This chapter starts by looking at hydration, why it is important, how much to drink and what exactly to drink. There is also advice on alcohol and caffeine.

Attention then turns to nutrition. The importance of carbohydrate - the main fuel source for marathoners - is explained. There are tips on how much carbohydrate to include in the diet and how to replenish stores. Following this is a short section on the role of protein for marathoners.

Next is a fairly in-depth discussion about the importance of iron in the diet and the reasons that marathon runners tend to have lower iron levels are listed and explained.

There are sections on supplements and other ergogenic aids and the chapter finishes with guidelines on race-day nutrition and hydration, including advice on what to do specifically during the race itself.

This chapter is all about managing recovery

First, the concept of recovery and supercompensation is introduced and factors affecting recovery rate are discussed.

The hard/easy principle is explained and arguments are given for adhering to it and followed up with information on how to structure a training week, including when to include consecutive hard days

Exactly what constitutes a recovery day is discussed including a little section "Recovery Considerations in the Real World" which gives some advice for those trying to recover while working full time.

There's a section on overtraining which includes advice on avoiding it and how to break out of it followed by advice on how to monitor one's recovery.

The chapter also includes advice on how much recovery to take before and after various types of training sessions and races. The chapter finished with some tips on how to speed up recovery and examines the usefulness of hot/cold therapy, massage, post-workout nutrition, compression apparel and cooling down

This chapter on supplementary training is divided into five sections.

The first is a detailed discussion on flexibility training. A 24-minute program is included and each of the exercises in the program is described fully and accompanied by a photo.

The second is core stability training. A basic core strength session is shown and each of the exercises is again described and accompanied by a photo.

Next is a discussion on strength training and how it can be useful for distance runners. A simple strength training session is given with each exercise described and accompanied by two photos illustrating the phases of the exercise.

A few running form drills are described and illustrated and the chapter finishes with a look at aerobic cross-training for runners including cycling, water running, inline-skating, rowing, cross-country skiing, elliptical training and swimming.

Tapering for peak marathon performance is thought important enough that the authors have dedicated an entire chapter to it.

The chapter starts by listing the benefits of tapering and then moves on to discuss how long a taper should last.

There are details on how exactly to go about reducing training load, including a sample three-week taper. And consideration is also given to tapering other types of non-running training.

The chapter finishes with a section on how to preserve energy (and sanity) during a taper.

The chapter begins with advice on warming up and the specific challenges faced by those warming up for a marathon.

Because of the fatigue it inevitably brings about, a runner's pacing strategy for the marathon may be slightly different than for other race distances and some guidelines are given here. There is also advice on what to do if circumstances (e.g. adverse weather) mean that a change in strategy is necessary.

The chapter finishes by breaking the marathon up into three sections - the first half, on to 20 miles, and the final 6 miles (and 385 yards) - and specific advice on how to go about tackling each section.

Also included is information on what shoes to wear for the race, when to not finish a marathon and on dropping out.

This chapter explains all the reader needs to know in order to successfully follow the schedules presented in chapters eight to eleven.

There is quite a lengthy discussion on "doubling up" (running twice in one day).

The chapter finishes with advice on adjusting the schedules as necessary according to adverse weather, injuries, illness, age and life in general.

Separate chapters are presented for those training:

Each chapter follows a similar format

Before Starting the Schedule

Advice on determining whether or not you are ready to begin the schedule.

A few notes on reading the schedules presented later on.

A description of how the schedules are laid out

Included in the chapters for those on higher mileage. Notes on including two runs a day in training.

Specific advice on racing according to where you are likely to be within a field of runners when racing.

Notes on recovering after the marathon.

An 18-week and a 12-week schedule are presented. Both are broken up into several mesocycles, each with a specific training focus.

Schedules are provided for those with 12 weeks, 10 weeks, 8 weeks, 6 weeks and 4 weeks between marathons.

A table of goal times with the times required for various splits.

A short glossary of the more technical terms used throughout the book.

Pete Pfitzinger is a running coach and exercise physiologist with an elite running history, having competed for the US Olympic marathon team twice and also having won the San Fransisco marathon on two occasions.

He holds an MS in exercise science, has worked as a contributing editor for Running Times and as a writer for several publications, including Runner's World. He has also co-authored .

Scott Douglas has been a competitive runner since the late seventies.

He's the former editor-in-chief for Running Times and has written articles for a variety or publications, such as Runner's World. He has also authored and co-authored .