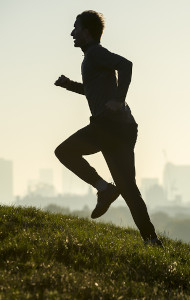 Uphill running and downhill running are unavoidable elements of training and racing for many road runners, and as such it's important that attention is paid to hill running technique, tactics, and strategies.

Running uphill is generally more demanding than running on the flat or downhill.

Even runners who only ever intend to race on flat roads or on the track can benefit from hill training sessions. See our sessions page for some hill training suggestions.

Uphill running can also be useful for those who are suffering from injuries, particularly those that affect the knees or shins. This is because running uphill tends to involve a shorter stride and hence less impact stress than running on the flat or downhill. Uphill running can also shift the foot landing position towards the ball of the foot, meaning that the achilles tendons and calves are better able to help absorb shock.

A good posture is important for all types of running, but the effects of poor posture particularly affect uphill running performance. This is because bending forward at the hips impedes movement around the hips and so limits knee lift, which is especially important when running uphill. Simply being aware of the necessity for good posture usually resolves any problems. A good tip is to ensure you're not looking down at your feet or the ground, instead setting your sites on the brow of the hill or in the distance. Some runners also find that it's helpful to imagine themselves being pulled up the hill by their hair (imaginary or real).

Increasing your stride rate when running uphill means that although less distance is covered with each stride, you will be running more efficiently. Consider how the same applies to a cyclist who shifts gear when approaching a hill. It's generally best to let the arms dictate cadence. There are two reasons for this: first, a focus on the arms means that hip and knee lift are improved (see below); and second, a direct focus on leg turnover often results in an awkward running style. This approach works perfectly well, since if you move your arms at a certain rate, the legs will automatically follow.

Focus on a down and back elbow drive. A common mistake runners make when running fast or uphill is to let the arm extend too much as it moves back. This not only wastes energy, but also reduces the effectiveness of the force. A little extension is normal and won't hurt, but if you place attention on the elbow movement then any straightening out of the arm will be limited.

Executed correctly, this down and back elbow drive will help lift the hips and allow you to bring your knee through more quickly and with less effort.

Coach Jack Daniels suggests that when running uphill in a race you should use as little effort as possible in order to keep up with competitors. This generally has the effect of improving technique and making the climb feel less laboured.

An effective tactic in a race when your competitor is running level or just behind you is to speed up a little once you've reached the top of the hill. The majority of runners tend to reduce intensity once they've climbed a hill, taking an opportunity to recovery a little. Pushing on once the top of the hill is reached can provide a real blow to such competitors. And remember that people behind can't hear your breathing, and this creates an illusion that you're using less effort than you really are.

Although downhill running usually allows you to run faster than on the flat or uphill, that doesn't mean it's easy.

While many runners include uphill sessions in their training, few include specific downhill reps or training. But doing so can bring about many benefits.

Avoid leaning back as you run downhill. If you do this you're effectively putting the brakes on. What you want to achieve is a slight forward lean from the ankles. Most runners find that once they deliberately make this switch downhill running feels much freer and faster.

If you let gravity do its job then it's probably that your cadence will automatically increase as you run faster. However, one of the reasons that runners often feel unstable when running fast downhill is that their legs are unable to turnover quickly enough to keep up with the pace.

The key here is to ensure that while running your trailing leg comes through quickly and efficiently. To achieve this deliberately bring the heel of the trailing leg up high. This will shorten the arc through which your leg has to travel and mean you're better able to achieve the faster stride rate needed for optimal downhill running.

The advice above applies to downhill runs where it's possible to maintain control. If the decline is particularly steep then it's best to keep safety in mind, and indeed lean back a little, perhaps keeping the arms out to the side for balance.

As you practise downhill running technique you should find that your confidence and ability grow and you are able to tackle steeper and steeper declines without danger.

If you exercise proper technique and avoid using downhill sections of a race as a chance to ease back and recover then you should find yourself speeding past the majority of other runners.

Hold back a little

Running downhill can be very demanding. Aside from the increased impact stress, the landing angle puts a lot of strain on the quads, which can mean you fatigue prematurely, particularly in longer races.

This can be mitigated quite significantly by including downhill running in your training, but just be careful not to overdo the downhills if you feel you'll suffer later on in a race as a result. This is of particular importance in the early stages of longer races.

Most runners work hard running up a hill and then use the flat or downhill that follows as an opportunity to recover. The best approach is to maintain an even intensity. This will of course mean slowing down when running uphill and speeding up when running downhill. However, you should find that the ground you gain by running well downhill should more than make up for any you've lost by taking a more measured approach on the way up. Experiment with this approach in races and you'll be surprised how effective it is.

We're repeating ourselves a little here, but as well as the benefits that both uphill and downhill training bring, it's really important to include them in your training to prepare properly for hill races. Try to simulate race conditions and experiment with running uphill and downhill at different paces while trying to maintain a similar intensity.

Although you'll typically run faster downhill than uphill, on a hilly course there will be a net loss of pace. This is because it's not possible to recoup losses made running uphill when running the equivalent downhill. This is mainly because of the effort that is spent on maintaining posture and performing running movement patterns when running downhill.

This means, as most runners are aware, that a hilly course will result in a slower overall performance than an equivalent distance on the flat.

For this reason, when training on hilly courses it's best to judge your effort rather than rely on a pace. Heart rate monitors can be really useful for this.